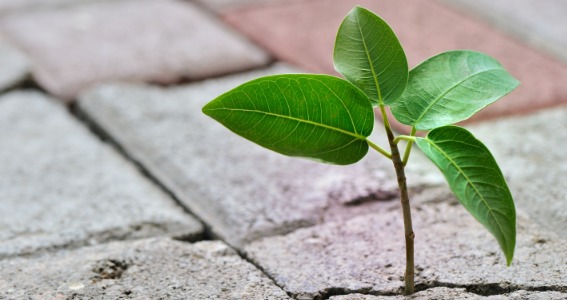 During the depth of the 1933 depression, Franklin D. Roosevelt declared that fear can be immobilizing during times of turbulence; but only if we give it power. During his U.S. Presidential inaugural address he stated with confidence, “The only thing we have to fear, is fear itself”. Savvy entrepreneurs know the same truth applies today. “Crisis” is another word for “change” and small business owners who give single minded focus to embracing change will walk through fear and create opportunity.

Currently, I’m the CEO of a two billion dollar company but I haven’t forgotten where I came from. I launched EMJ Data Systems in Guelph, Ontario selling products from the trunk of my car, grew it into a thriving enterprise, and eventually sold it to SYNNEX in 2004. I’ve been around long enough to understand trends and I believe it’s critical for entrepreneurs and investors to understand how businesses react to a slowing economy.

I predict with confidence that as earthquakes shake the foundation of large businesses, cracks will be exposed for smaller businesses to fill. Entrepreneurs that keep their eyes and ears open for the opportunities around them will move forward and keep growing.

Here are six strategies for smaller businesses to take advantage of during the downturn:

A mandate from head office to “cut 10% of staff” or “close a plant” can seem as arbitrary as spinning a carnival wheel. And, while there may not be any rhyme or reason to this approach, wonderful opportunities exist for the small business owner.

Large scale businesses start their slash and burn cost cutting measures because they can’t justify the large overheads without the large profit to match. However, smaller pieces of business are perfect for start-ups and smaller businesses. By talking to one of the many people who get laid off from the larger corporations, small businesses can leverage an already established client base and become an alternative provider.

Often large companies are so relieved to “stop the bleeding” that they’ll happily give the business away. It’s possible to buy assets for pennies on the dollar and even have the seller finance your enterprise. –You won’t know unless you ask. Also, consider that once larger companies have divested themselves of the business you’re interested in, they won’t be going after any new opportunities. This means a wide open market for you without competition. For example, my son, David is going into the alternative energy business – solar hot water and pedal power electricity. In stable economic times many large companies would be entering the environmental market. –Not now!

One of my mantras is “fail often, fail fast, and fail cheap”. This is what entrepreneurship is all about. You’ll have little competition from large companies in anything new or creative now. Why? –Because turbulence can paralyze large companies. People who work in large companies are acutely aware that their jobs are on the line. So, they’re less willing to take risks and challenge the status quo even if it’s in the best interest of the company.

3. Choose from the Top Employees

Up until a few months ago it was very tough to hire good people, as they were employed at larger companies. But so many have been downsized out of a job, there’s an eager pool of top talent out there. Large companies that trim often do so based solely on seniority and not on expertise or experience. There’s a good chance that there are very valuable employees who would be willing to work for smaller companies for a lot less, as advisors, or even for future consideration. They have time on their hands and you’re looking for a few great minds; everyone wins.

There will also be opportunities for entrepreneurs to take on work being outsourced by larger corporations. For example, the mandate from head office may be to reduce the number of employees. So, the manager cuts the janitorial staff. Not surprisingly, the office still need to be cleaned, so after a few weeks of piling dirt and garbage, the manager hires an outside company. –Be first in line.

Consider also that managers in companies are highly creative at getting around “mandates” from the top. Often this is done by having different budget areas; they’ll clamp one budget but spend in another area. Yes, this is an illogical business practice but this is what big businesses do. Being at the right place at the right time will help grow your small business.

Change tends to be a friend of the small business owner because entrepreneurs work independent of the decision making bottle-neck that larger companies have to deal with. Small businesses are afforded the latitude to be more creative and react faster. The account that had no interest six months ago may be eager to talk today, because desperation can force companies to save money or to increase sales. Now is the time to pitch companies who previously turned you away.

6. Get Creative and Start Trading

The present crisis is credit-related so many small entrepreneurs are saying, “But, I don’t have any money”, and, “Cash is King”. This is where entrepreneurial creativity comes in. You do not need cash; you need what cash can buy. In tough times, many businesses will have surplus capacity. As an optimist, this means you can negotiate or trade more. If I own some office space and it’s not rented, I may be willing to allow a tenant to just pay utilities and taxes. The same goes with almost everything. Look at anything you want to buy and find an ally to work with. You’re seeking someone who can supply the things you need cheap, free, with creative payment terms, or as barter for an exchanged service. Small businesses can be flexible and inventive, big companies can’t be. Your best sources of cash are the many suppliers who need your business now more than ever.

In tough times, larger companies tend to overreact in the short term to the detriment of the long term. This creates opportunities for smaller businesses to remain mobile and flexible in changing times, creating a variety of unique possibilities for success.

Earthquakes can reveal openings and ideas never before encountered, new life growing from the fissures. Life is awash in possibilities if we keep our eyes open.

This could be your best year yet!