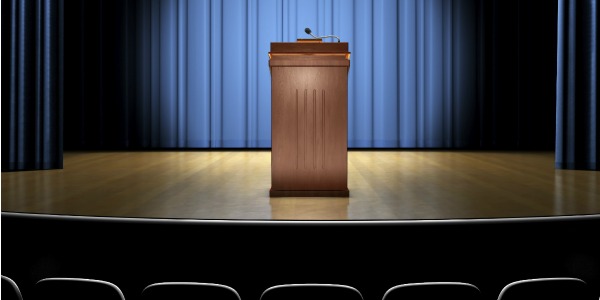 As a communications coach, I work with speakers in a variety of fields; some are top executives running large companies and others are entrepreneurs struggling to get their startups off the ground. Some are very wealthy while others have poured everything they have into their dreams. But when it comes to public speaking, they all share one experience in common – none are naturally gifted speakers. The best communicators work at it, and work hard. Think about it. Nobody is born with a PowerPoint in their hands. It takes commitment and practice to be a great speaker. But above all, it requires confidence, boldness, and audacity.

In Outliers, Malcolm Gladwell examines the factors that lead to extraordinary success. Citing scientific research, Gladwell observes that it takes 10,000 hours of practice to be world class at a particular skill – sports, music, or public speaking. Great speakers aren’t born; they evolve. They get better over time because they practice much more frequently and much harder than everyone else.

In my own interviews with exceptional speakers, I’ve also noticed that, in addition to practice, they carried a vision of themselves as outstanding communicators. Great speakers visualized themselves electrifying their audiences, even when they had very little experience in public speaking.

Yes, practice will give you the confidence and technical skills to master the art of public speaking. But to become a truly masterful communicator, it requires something more, and that something more is an unflagging determination to succeed as a speaker who inspires and astonishes his or her audience..

In November 2003, “The Terminator” himself, Arnold Schwarzenegger, became the 38th Governor of California. As a reporter for CBS, I had the opportunity to cover Schwarzenegger’s first 100 days in office. This role gave me a front-row seat to his public appearances as well as access to his closest friends and advisors.

This was not an opportunity to watch just any politician; Schwarzenegger is one of the most famous personalities on the planet and has an astonishing success story. I watched Schwarzenegger give very powerful speeches to business and youth groups around the state. He could deliver a PowerPoint presentation with the best of them. Schwarzenegger was highly charismatic, persuasive, and inspirational.

I learned that Schwarzenegger was not always a great speaker. In fact, when he first came to America, he could hardly speak a word of English and was not very comfortable in front of groups.

He was naturally gregarious and outgoing, but unrefined as a public speaker. To succeed as a speaker, Schwarzenegger had to apply the same discipline that catapulted him to the top of the bodybuilding world, and later, the movie business.

Just as Wayne Gretzky practiced harder than most of his peers to become one of the greatest hockey players of all time, Schwarzenegger approached public speaking as a sports conquest, always practicing to improve.

After getting involved in charity work, he began to give speeches frequently, asking his staff to find him more and more opportunities. He felt he had to prepare for the next stage in his life – and whether he became involved in directing movies, charity work, or politics, he knew public speaking skills would be essential.

Schwarzenegger says he enjoyed extraordinary success in every aspect of his life – bodybuilding, movies, and politics – because he always visualized his performance first. He had such a clear vision of himself succeeding in everything he tried, his mind and body never questioned it. In his own mind, he had the confidence to stand up in front of large groups inspire them with his words. In his own mind, he had seen himself give thousands of speeches and each one was a rousing success. When Schwarzenegger takes the stage, he has the look of confidence and audacity. What few people know is that his confidence came only after he pictured himself succeeding in that role..

Have you ever said to yourself, “I’m not charismatic, inspiring, or persuasive”? If you have, you need to change your negative self-talk. To be successful, personally and professionally, you need to be thinking, “I have an extraordinary message and my listeners will be inspired, dazzled, and moved to action!” And when you match that thought with the belief that it’s true, it eventually will be.

I worked for Barbara Corcoran. Corcoran is a New York City entrepreneur and the city’s real estate queen. She turned a $1,000 loan from a boyfriend into a $5 billion-a-year real estate empire called The Corcoran Group. The boyfriend is no longer in the picture, but she’s clearly doing just fine. Corcoran was not a natural public speaker early in her career. In fact, she was very nervous about speaking in front of others. But she believed in herself and took the necessary steps to practice and improve. These steps included a stint as a teacher at a local community college.

Corcoran told me that even when she was working as a waitress (before starting a real estate career), she always had a vision of herself as a successful entrepreneur. When she decided to enter real estate, she had a vision of herself as a successful, confident speaker. “I pictured myself in great detail, including the clothes I’d wear to address an audience of thousands of people who were eager to hear my expert advice,” she told me. Corcoran didn’t just succeed in speaking to thousands, she underestimated herself. Today, she speaks to millions as the star of the ABC reality show Shark Tank.

It all started in her imagination and a crystal clear picture of what she wanted to accomplish. For many people like Corcoran, confidence does not come easily but, if you see yourself succeeding long enough, soon you’ll believe it and you’ll radiate the boldness of a winner..

Change The Way You See Yourself

Toby Keith is one of the hottest acts in country music. Not everyone believed in him, though. Executives at one record label told Keith that he couldn’t write or sing and literally shoved him out the door.

Keith told a friend of his, “You’ll pay to see me sing on day.” He created a vision for himself so powerful that nobody could stop it from happening. It was only a matter of time before his vision because a reality.

In much the same way, your success in public speaking will be the direct result of the vision you have for yourself. Create a vision of a powerful and persuasive presenter, co charismatic and convincing that your listeners cannot help but believe in your message. Remember, when you change the way you see yourself as a speaker, what your audience sees will also change.