Entrepreneurial Philanthropy: Making a Difference One By One 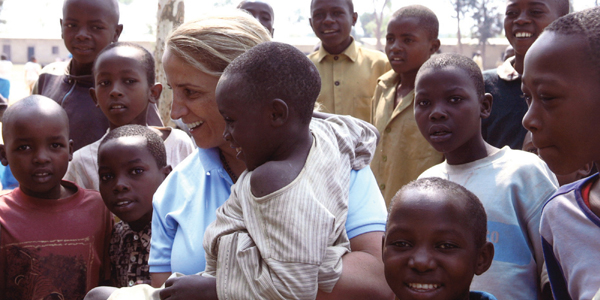 Over the past several years, I have visited some of the world’s poorest nations. Often these visits are made on the heels of heartbreaking disasters. When I arrive home, the question from many is very often the same: “How can you handle seeing what you’ve just seen; experienced what you’ve just experienced?”

The answer is simple.

I’m an optimist and irrespective of what the situation is, I believe with every fiber of my soul that we can make things better. There’s a wonderful wave of positive energy and good intention in this world and that’s where I put all of my focus.

Did you know that the Chinese symbol for crisis is the same as the one for opportunity? It’s a belief I live by.

The challenges we face in the developing world can at times seem impossible to tackle. But for me, the key is distilling the problem down to a very basic idea. Start with one person, make one profound change, one day at a time; then add the potential of collaboration, and we see how a group of like-minded people can immediately be exponentially more powerful.

There are moments in your life when reality kicks in; when tragedy hits you at your core. I remember sitting with my very ill husband in the hospital. It was September 11, 2001, and there was another tragic human disaster unfolding simultaneously.

This was one of my darkest days, and it was then that I came to the realization that no value is placed on a single human life. I promised myself that night that I would dedicate the rest of my life to promoting the value of one life – the belief that one person can change the life of another. Great change can come when we all commit to taking action, one by one.

After the loss of my husband, with the help of several close friends including Edward and Suzanne Rogers, I established a foundation in 2005 in my husband’s memory that soon became known as ONEXONE (one by one). ONEXONE was created on the principles that every life is infinitely precious and that each person can make a profound difference in someone else’s life.

ONEXONE’S mission is to help the most vulnerable members of society: children in need around the world. Funds raised are given directly to programs and projects that give children access to five fundamental pillars: water, food, healthcare, education and play.

I began travelling abroad and became personally involved in ONEXONE’s humanitarian efforts. I have always been philanthropic in the sense of giving money to those in need, but once I started travelling to developing areas, I became much more emotionally involved and personally connected. I crossed a line that few can cross back over.

Philanthropy had become more than a passion; it became my destiny.

I remember travelling to Haiti in 2008, just after it had been hit by a fifth hurricane in a short period of time. Relief funds, food, and water were nowhere to be seen. I was at a loss to explain how the world was literally ignoring the suffering of an entire nation. Matt Damon and Frank McKenna led the mission. They were both able to use their tremendous media relationships to attract the attention of worldwide press, and together we were able to shine a spotlight on the situation. It allowed us to show the rest of the world the horrible reality of the floods and devastation.

As we waded through knee-deep water, we passed a house where a family was living on the roof. I pointed my camera to take a picture. As I focused the lens, a teenager raised his middle finger, and I was taken aback. I didn’t take the picture because I understood his message: “Why are you always here at our worst moments, where whatever little dignity we have, has further eroded? In times of crisis, you all descend on us with your cameras as if we’re no better than animals in a zoo.” He was right. And I felt terrible.

This moment further reinforced for me that it was time for a change in how we give back. It was something that I had been thinking about for years; the idea that philanthropy as I knew it, with all its good, was devoid of dignity. Moreover it was taking care of immediate needs and not creating sustainable change. We had to find a way to bring dignity and long-term hope back to the people of these devastated communities. We needed to follow a new path.

Handouts lack the dignity that we as humans crave. The aid we’re giving is required, but I can imagine how hard it must be for a father or mother to stand in line for a food handout while their children watch. People want to work; it’s human nature. They want to achieve and to feel that their lives have purpose and a future.

President Clinton was right when he said we have to “build back better” – not just buildings. I began to understand that we, the entrepreneurs of the world, could help make that happen. And I knew that it was finally time to take action.

The idea of creating a sustainable model is simple, and the execution of the solution is possible, but only if we can change our way of thinking.

I believe the solution is rooted in the very foundations upon which the U.S. and Canada were built: a spirited, entrepreneurial approach to business.

It’s about creating business opportunities in the developing world that enable opportunities for people to work and prosper. This model can help ensure a vibrant future for the countries that today depend so much on aid.

We must create true partnerships. The most successful of which will be based on strong business models, creative thinking and a deeper and fairer commitment to reinvesting and giving back to those places where we gain great advantage.

It’s a modern way of thinking about long-term profitability. It’s an impact investment: creating for-profit models that are authentic and local to these communities, where the local community gets back what they put in.

In this new model, we encourage future leaders, entrepreneurs, and investors to consider business opportunities in the developing world, while being aware and respectful of the financial models of industry in each particular country. We want to stress the idea that it’s what an entrepreneur does with their profits that will have the largest impact on change. Employees will benefit, but more importantly, it will allow these business owners to better understand the needs of the community and help build the infrastructure critical to the future success of the community.

The idea came to me on my very first trip to Rwanda in 2006, and finally took shape after the Haiti earthquake in 2010. Industrial Revolution II – or simply “IRII” became a true passion as I witnessed the worst devastation imaginable. We have had so much support on this project including Dr. Paul Farmer of PIH and the Clinton Foundation and task force on Haiti as well as the IDB and the Clinton Bush Fund, to name but a few. There is a strong sense of collaboration and true spirit of change and brilliant innovation. With so much support we are close to seeing our dream come to fruition.

My hope is that Haiti becomes the blueprint for this new path. Just this past winter, in Haiti, over 1,000 representatives from the business world came to a conference organized by the Clinton Foundation and the Inter-American Development Bank (IDB). This was one of the most inspiring conferences I have ever attended. It was clear that there is a palpable movement to create the business environment to really give back to Haiti through this new model.

I knew then, as I know now, that we have a real opportunity to be part of a historical process. As entrepreneurs, we can help the Haitian people bring their country back to the glorious days when they were the richest country in the Caribbean.

For the last few years, I have spoken to young adults and students regularly, encouraging them to explore the developing world for opportunities. The story is just beginning and the future is certainly looking brighter.

The planet has welcomed its seventh billionth child very recently in the Philippines. Between three and four billion of our fellow global citizens don’t have clean drinking water. The next 25 years will bring many challenges and we need to find innovative ways to take care of ourselves and those around us. It’s crystal clear to me that we can all leverage our skills to change things in a positive direction.

Every single one of us can make a difference every day.

Business leaders can use their business models and resources to create change. This should mean encouraging employees to believe strongly in the core values you believe in, and be ambassadors to help create change. I believe corporate responsibility is important. The soul of a corporation should act like a living entity whose raison d’etre is to deliver a strong profit while embracing the philosophy that giving back to ensure sustainability is truly a privilege that will lead to bigger successes.

In Haiti I see a canvas for true and sustainable change. There is so much optimism and great will to be harnessed for good.