F.E.A.R.: Face Everything And Run 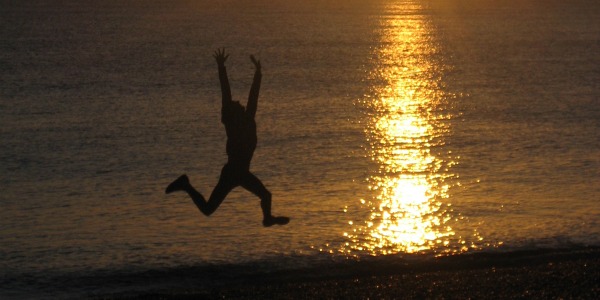 Of all the four-letter words in our vocabulary, fear is by far the most powerful. It’s an emotion that can destroy hopes and dreams and wreak havoc on goals and aspirations. Fear shows its face in many different ways and the resulting anxiety, panic, stress, or complacency has, at one time or another, stopped all of us from improving or enhancing our lives.

Fear isn’t selective. Even the greatest brands in the world feel fear and fail before they succeed. Michael Jordan, one of the greatest basketball players in the history of the NBA was cut from his high school basketball team, Jerry Seinfeld bombed his first time on stage as a stand-up comedian, and Donald Trump and his businesses have faced bankruptcy numerous times. Regardless of who you are, failure breeds success, but fear of failure won’t allow you in the game.

But what if fear didn’t play a part in your life? What if you could conquer fear instead of allowing it to create the chaos it often does? What if you walked through fear while learning a new skill, entering a new relationship, or embarking on a new challenge?

To conquer fear we have to see where it lies, embrace it and then – crush it!

U.S. President Franklin D. Roosevelt once said, “We have nothing to fear, but fear itself.” Truer words were never spoken. We’re afraid of fear. It could be fear of the unknown, fear of failure, fear of consequences, fear of embarrassment, or fear of change but, regardless of how we see it, this is a guarantee – fear rests in our minds. If we can conquer fear, then we’ve knocked down the greatest barrier to success. Fear can be conquered, if we put our mind to it.

As a leadership and performance coach, I spend an inordinate amount of time following the success principles of business executives, athletes and entertainers. Fear of failure is not an inherent trait of any of them. But, before we get to the five key success factors in overcoming fear, let’s put a couple of things in perspective.

First of all, everyone reading this article has, and will continue to conquer fear. We did it as children, teens, and adults. Whether it was asking someone out on a date, riding a roller coaster, asking for a raise, or dealing with the ups and downs of relationships – all of us have overcome some form of fear on a regular basis for our entire lives.

Secondly, we all suffer from worry or stress; what’s important is how we respond to those emotions. Remember, as a general rule, 60% of what we stress about never happens. 30% of what we stress about has already happened and there’s nothing we can do about it. The remaining 10% traditionally falls under health issues or those OMG moments we all experience like bungee jumping, rock climbing, or looking at our bank statement (ouch)!

So, if we agree that we’ve conquered fear since we were toddlers, and that 60% of what we stress about never actually happens, then what’s stopping you from plowing straight through fear and running free?

What’s stopping you from achieving your goals or realizing your dreams? Whether it’s fear of failure or

fear of the unknown – the answer lies in how you see things. You can find a number of acronyms for F.E.A.R. One of the more common ones is False Evidence Appearing Real. This acronym falls perfectly in-line with the 60% rule. Crush fear and watch how quickly your life changes.

Here are the 5 Key Success Factors in overcoming FEAR:

If you believe your fears to be the absolute truth then you’re done. However, if you can accept the fact that 60% of what we stress about doesn’t happen, then you’re on your way. List your fears by writing them down. If it’s a phobia about spiders, write it down. If you have a fear of commitment, put pen to paper. If you have a fear of changing jobs then you’re not alone. By creating a list, you become an observer and in this way, take any anxiety you may be feeling out of the equation.

Revisit your list to see if you’ve identified your fear, or if there’s an underlying fear you may have missed. For example, is your fear about changing your job or is it related more to the loss of the security of a regular paycheque? If so, security is the issue. Get to the root of the fear, not the symptom.

This is a similar process to goal setting. See yourself with the positive outcome of conquering your fear.  A quote often cited in personal development is, “What would you attempt to do if you knew you could not fail?” What would that look like?

For example, if you have a fear of flying, visualize what the perfect flying experience in your mind looks like. Don’t put conditions on it, simply visualize a positive outcome. Do you fear starting your own business? Then don’t look at how it won’t work, see it in a positive state.

Start implementing the steps to crush the fear. The best way to do this is with a plan. One of the biggest fears people have is public speaking. So if you were creating a plan, what would you include in that plan that would enable you to become a better public speaker? Here are a few thoughts: Buy a book on public speaking, study other public speakers, take a speaking workshop, join Toastmasters, hire a speech coach, start speaking to a small group and build from there.

Creating a plan will give you a roadmap of where you need to go to conquer your fears. It’s like going to battle only you know you’re going to win every time!

Don’t be afraid to look or ask for support. Are there people you admire who have previously overcome obstacles to eliminate their fears? If so, ask them how they did it. What can you learn from their experiences? Remember, many of them were in the exact same position that you’re in. Afraid of taking risks? Then talk to the experts – it could be a family member, a neighbour or in maybe the answer lies in the pages of business/self-help books.

When you achieve any goal, take the time to celebrate. It can be as simple as an approving nod when you look in the mirror or it could be rewarding yourself with a night out on the town, but celebrate your victories. There is no better feeling than overcoming a fear, so treat it with maximum impact!

Our attitude decides our altitude. How far you want to go in life will be based on how you see things.  No one achieves success until they experience failure. Failure is a great education, but a fear of failure doesn’t get you through the front door of the “School of Success.”

Face fear head on and deal with it. Don’t let obstacles or the naysayers stand in your way. Go under it, over it, around it or simply find a way to get it done. Just keep going and never give up or give in.