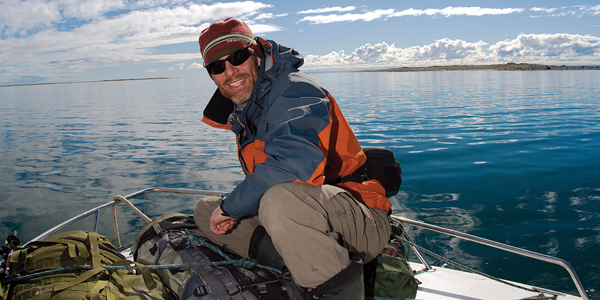 My dream began nearly four decades ago in what was then the whirling mind of a panic-stricken youngster. It was a Friday night in the winter of 1975 and the city of Montreal was in the throws of a snowstorm. My younger brother and I, accompanying our mom and dad, became separated from them in a large department store in the centre of town. It was closing time and an overzealous security guard decided to kick us out rather than help us find our parents.

I was nine-years-old and my brother was five.

I remember that moment like it was yesterday – the feeling of anxiety and uncertainty of what to do but knowing full well it was completely up to me to do it. My little brother began to cry, so I took his hand and started to walk. I didn’t know where I was going, I didn’t know where home was, but the walking warmed us up and the physical movement eased our minds. My brother trusted me implicitly and I did my best to disguise my uncertainty with a look of confidence and a smile.

It was after midnight when the familiar sites of our neighbourhood began to appear through the veil of the winter storm. We’d soon see the flashing lights of a waiting patrol car and feel the reassuring embrace of our very relieved parents. We’d made it home. It was the scariest ordeal of my young life and, I’d soon realize, the most exhilarating and empowering one as well. It was then that my dream took shape.

There’s often little logic in a dream – it can be as unique and quirky as the individual it inspires – but it still holds magic. The fact that I was an urban, inner-city kid who knew nothing about outdoor adventure didn’t matter one iota. I had a dream, and now I wanted to ski to the South Pole.

Life would move forward and I’d mature, attend university and pursue studies in architecture. I’d discover a passion for endurance sports and would use a road bike as a tool both to explore the outside world and exhaust my competitive angst. An architectural career would envelope my world and I’d meet a beautiful woman and start a family. I was happy and my South Pole dream would recede in the midst of my busy life but like a ticking clock whose sound is often unheard but always there, it would pierce the silence of my thoughts during moments of introspection and solitude.

The death sentence for any dream is when desire is smothered by uncertainty and fear.

If I had looked at it with any degree of rationality, I suppose, I likely would have given up on my dream long ago.  Fortunately, cold logic and imagination aren’t good bedfellows, in my mind anyhow, and the dream held on.

In the summer of 1997, my good friend Frank Wolf and I ran Vancouver Island’s 77-kilometre West Coast Trail in a day (in just over ten hours, in fact). We wanted to experience the full majesty of the trail but we had this hankering to run it as well.  Critics quipped that we were moving too fast to see anything  – the grueling world-renowned trek weaves a bold line along the edge of Vancouver Island’s rugged West Cost, and typically takes about a week to hike, but nothing could have been further from the truth. The experience was much like an accident – time slowed down, perceptions intensified, memories became hyper-clear and the volume of my ticking clock began to grow.

In 1999, when a close friend asked me to join him on a cross-country ski race across Alaska’s infamous 1,860-kilometre Iditarod National Historic Trail, I jumped at the offer despite the fact that I was completely out of my league and didn’t realize it at the time. I first sensed I was in way over my head when discovering that the Iditarod trail had been skied only once before, by a legendary Alaskan skier. The feeling grew even stronger when only three of us registered for the event and it came to an alarming crescendo when, standing at the start line, I noticed the race motto emblazoned across a banner stating: “Iditasport: Where cowards won’t show and the weak will die.”

A barren wilderness whose terrain is as unforgiving as it is cold, Alaska proved to be everything I had hoped for and everything I had feared. I struggled through a serious chest infection that had me coughing up blood for a week; I skied further in a single day than I’d ever managed to do before only to do it again and again, day after day; I found myself being pushed to the point of breaking – on so many levels – only to be pushed a little bit further and, much to my surprise, enjoyed it.

On Day 25, in the tiny village of Nulato, nestled on the frozen Yukon River, I was describing our expedition to an inquisitive four-year-old named Kelvin who was fascinated by our adventure. He sat quietly, listening to every word I told him, and hit me with a question I was hopeless to answer: “What was I looking for?”

I wanted to go the South Pole, of course, but even a four-year-old figured out I was a long way from there. I was in Alaska touching on something that my South Pole dream encapsulated but I couldn’t articulate what. The question sat with me for the remainder of the expedition and gnawed at me for years to come.

The Alaskan adventure sparked something in me and, before long, I found myself travelling the world – a man on a mission it would seem – undertaking a myriad of expeditions. I saw myself hacking through the jungles of Northern Borneo retracing the infamous Sandakan Death March route for the first time since the Second World War; I attempted to summit all the 3,000-metre (10,000-feet) volcanoes running the length of Java, Indonesia, in the midst of a jihad; I travelled to the Canadian High Arctic to search for the remains of Sir John Franklin and his crew, who vanished during a doomed expedition to find the Northwest Passage; I followed teams of jungle patrollers, some atop huge Asian elephants, looking for poachers and illegal loggers in the jungles of Sumatra, and through it all the question hung with me: “What was I looking for?”

I got closer to my answer in 2008, when my adventuring career came full circle and I was asked to join an all-Canadian team planning an expedition to the South Pole. The unintended consequence of my expeditioning passion was to build a reputation as someone who had the necessary experience to make it to the South Pole. The fact that it was my dream since childhood was my secret alone.

Antarctica is the coldest, windiest place on the planet, an environment so harsh and inhospitable that the only life able to endure its icy grip is a tiny insect surviving off bacteria. The icy continent is a true no man’s land and demanded everything of me.

Our 1,100-kilometre trek from the edge of the Antarctic continent to the Geographic South Pole was an unsupported effort that saw us dragging sledges, weighing well over 90 kilograms, packed with equipment and food we’d need for the entire journey. Dream or not, the trek to the South Pole was a brutal endeavour.

We crossed countless crevasses, yawning fissures in the glacier ice as wide as roadways, atop precarious snow bridges, knowing full well that if one of those bridges broke we’d drop into the bowels of the glacier never to be seen again.

We battled katabatic winds that pummelled us without respite and we hid from the scorching sun’s rays, which are unchecked by ozone at these southern latitudes.

Here, exposed skin gets fried even before the cold air freezes it. Clouds did give us some relief from the sun only to submerge us into a world of white, like characters from a José Saramago novel, forcing us to grope our way forward through the blinding milky atmosphere. Even eating, usually a rare moment of rest on such an adventure, became a chore as we needed to eat upwards of 8,000 calories a day simply to keep warm. We ate pounds of macadamia nuts, slabs of deep-fried bacon and large chunks of frozen butter in a saturated-fat buffet that still saw us lose nearly 20 pounds and through it all, through all the degradations, through all the misery, I found myself looking out on the wild, frozen landscape saying to myself: “I’m here, I’m really here!” I was exactly where I wanted to be.

When I had finally reached the South Pole it was a strange moment. A feeling washed over me and I felt like that little nine-year-old boy again, holding my brother’s hand, coming in from the storm.

Reaching that spot was something I had dreamed about for more than three decades, and now I was there; I was at the top of the bottom of the world. I knew then I had an answer to my question.

I had reached the South Pole – breaking a world record in the process – and fulfilled my childhood dream of getting there. But I also realized that the most important part was not fulfilling my dream but rather striving to achieve it. The pursuit of this thing that was important to me, the pursuit of my dream, is what made me the person I had become. I needed to get to the South Pole to discover that I had found what I was looking for all along.

Forget wishful thinking – realizing a dream takes hard work and dedication. Here’s how to get started:

We all have dreams. If you have a desire to do something that is truly important to you, no matter how crazy it seems, go for it. You’ll become a better person the moment you do.

Achieving anything that’s worthwhile requires preparation  – lots of it. The legendary Norwegian explorer Roald Amundsen declared: “Adventure is just poor planning.” It’s a statement that’s a little clinical for my sensibilities but in essence has much truth. Avoid the inevitable mishaps along the way by doing as much preparation as you can beforehand.

No one achieves anything alone. The sooner you recognize this, the sooner you’ll be moving to where you want to go. Surround yourself with people that support you and your dreams and ignore your detractors.

Regardless of how well you’ve prepared, things will happen that you didn’t expect. Life happens when you’re making other plans. Do the best you can to get through it, and don’t allow the setbacks to derail your efforts.

Most dreams die because the fear and uncertainty of the pursuit overwhelms the passion. It’s far easier to give up on a dream than to see it through. Be different, take the tougher route, pursue your dreams and you’ll see them through.

We shall not cease from exploration, and the end of all our exploring will be to arrive where we started and know the place for the first time.