Have The Audacity To Be Remarkable 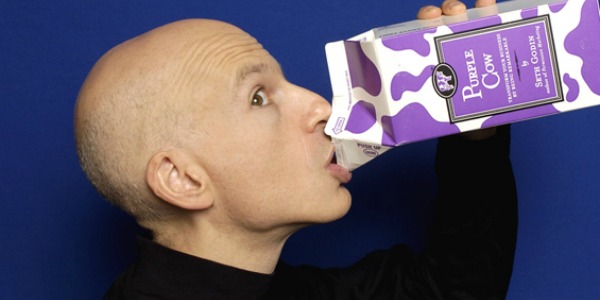 What fears of your own did you have to lean into in order to complete your recent book, Linchpin?

The biggest fear was the fear of blowing it, of alienating a hard won audience. The second fear was in not living up to the opportunity, of writing something small or not powerful. Walking the line between these two fears was an exhausting process. After a while, I gave up and just embraced it.

Please describe an archetypal “linchpin”. How would you know you were in the presence of a linchpin?

The linchpin is the person you don’t want to live without. The person who does work that matters… someone who races to the top instead of running to the bottom. A linchpin is generous, she does art, and she changes the people around her. She’s interested in volunteering, in seeking out opportunities to do the work, as opposed to seeking out ways to fit in.

It’s important to know that this person isn’t necessarily charismatic, or the CEO, or the most talented – those are secondary.

You argue that linchpins don’t require resumes. Why is this?

A resume is a piece of paper filled with brand names that proves you are compliant. The resume makes it easy to reject you, to scan you, to file you into a niche or a cube.

A linchpin has projects and referrals, and testimonials. The linchpin has a reputation that speaks for itself and rarely does she have to go looking… the best work is more likely to come find you.

Who are your favorite linchpins of all time?

You. Anyone reading this. My friends. Everyone has been a linchpin at one point or another, the only question is whether you can find these traits when you really need them.

Malcolm Gladwell proposes the theory that people who rise to greatness were born into privilege or had, in some way, an advantage that lead them to where they are today. Your theory is that we can choose to succeed. That if we choose to “do”, we will fail, but in failing, we will eventually succeed. Do you believe that everyone has the potential to “will” or shape their life by “just choosing”?

Malcolm and I don’t really disagree. His point is that by accident of birth, many people get a head start, while others have a disadvantage. BUT, and it’s a big but, it’s not guaranteed. Steve Jobs and Jeff Bezos are orphans. Nelson Mandela lived in a prison cell. Bob Marley was born in a tiny shack. The list goes on and on.

Yes, at some point it’s up to you. You can choose.

What have you failed spectacularly at?

What haven’t I? I’ve started more than a hundred business projects, and all most all of them have failed. In my first year as a book packager, I got 900 rejection notes. My English teacher wrote in my yearbook, …”to the bane of my existence.” Instead of starting a web company like Yahoo!, in 1993, I wrote the Smiley Dictionary…

You advocate the importance of having the courage to be remarkable knowing the alternative is to live an “invisible, anonymous, uncriticized, safe” life. What do you believe it takes for people to choose to be remarkable? Is there a common catalyst?

It goes back to the fear issue. I think if you’re smart, you’ll look at the new economy in which we live and realize that it’s more frightening to fit in than it is to stand out. Your chances of failure are far higher if you do nothing or sit still.

The second half: you need to care. If you don’t care, how can you possibly do the hard work to stand out?

What prompted your own internal shift?

My inclination has always been to challenge the status quo, but I was aware (even eager to hear) of the criticism and conventional wisdom that told me to fit in. what I discovered, though, was that when I ignored the critics and did what I thought was right or important or beautiful, it often worked.

I agree with your belief that we have been fundamentally brainwashed culturally and that our education system is “broken”. We have been taught through fear to conform, to obediently follow the rules and accept mediocrity. What do you believe parents can do in an effort to teach their children that they can lead; that they essentially have a responsibility to lead and not follow?

The first thing, of course, is to actually decide that this is important. Most parents refuse to do this. It’s a sad truth.

Once you decide, you’ll discover that you have five or six or seven hours a day with your kids, for ten or twelve, or twenty years. What are you doing with that time? Are you watching TV? Playing Candyland? Or are you brainwashing them, pushing them, setting them up to succeed (and fail) over and over again, so that by the time they’re 20, they’re ready?

You refer to the term “emotional labour” in Linchpin. What is your definition of it and why do you feel it’s essential in today’s marketplace?

What did your parents demonstrate to you about achievement? In terms of your achievements to date, what have you been most proud of?

My parents taught me just about everything I know about doing work that matters and making a difference. My dad runs a small company in Buffalo, an industrial town, and his organization actually makes stuff. Along the way, he was the president of the local theatre, the head of the United Way, and a volunteer in literally dozens of important causes. And he taught at the University of Buffalo. Not for the money, but because it was important.

My mom passed away about ten years ago, but she too led the way in terms of connecting with people and impacting the world. She was treasurer of a national organization, worked full time reinventing the way the world interacted with art museums, and also pushed herself (and the people around her) to learn all the time.

I was really lucky.

What I’ve discovered though, is that even people with such a stellar foundation are able to choose to make an impact. And that’s cause for real celebration.

What do you feel in your heart you are still destined to accomplish?

I’m skeptical about destiny. I think we have opportunities, and we take them or we don’t. I’m hoping that moving forward, I’ll use the leverage I have and take the opportunities that present themselves, as opposed to shrinking from them.

What are you most grateful for?

Art. In any form. The art of making a difference and being human and respectful and changing the people around us. The art that gives us spaces to do our best work, and do work that matters. I know that sounds a little flaky, but distinguishing it from the factory, from the cogs and the industrial system… that helps me see the difference between light and dark.

If you could accurately communicate one truth to the world, knowing that it would fundamentally change the world as we know it, what would it be?

5 Difficult Ways to Change the World: