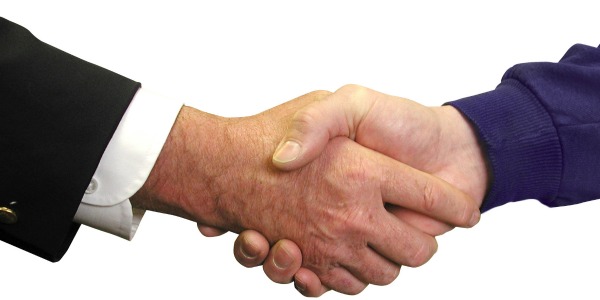 As the founder and CEO of the financial literacy nonprofit organization, Operation HOPE, I’ve been blessed with the opportunity to meet many great leaders – powerful men and women such as President Bill Clinton, Archbishop Desmond Tutu, and civil rights icons Dorothy Height and Ambassador Andrew Young, just to name a few.

After spending some time with these amazing people and having had the privilege of being mentored by Ambassador Andrew Young, I started to see a pattern. The leaders that I admired most were the ones willing to give the most of themselves. I began to study their habits and tried to understand more about their leadership qualities. My research led me to develop “The Five Principles of Love Leadership.” Somewhere between my need to share my findings and my colleague’s enthusiasm, I was convinced to write a book on the subject… and so I did.

One of the most amazing things I received from writing the book is that I was able to interview the people I most admired and I was able to get their thoughts on this new concept I was developing. LOVE LEADERSHIP: The New Way to Lead in a Fear Based World (Jossey-Bass) is an account of how successful leaders lead through faith.

Throughout my book, I make the case that there are only two things in the world: love and fear, and what you don’t love, you fear. Most of our so-called “leaders” have led by fear.

Fear may seem to work in the short term, but over the long term, fear flat out fails. Worse, I believe fear is the ultimate prosperity killer. If you want to paralyze an organization, your family, your community, or your own life, insert a culture of fear.

So you say, “If this is the case, and if fear is so corrosive and so bad for us, then why has fear seemingly done so well in our little world?” The answer is the feel-good, me-based, immediate gratification disease, called “short-termism.”

Short-termism is similar to fear and lazines in that it relies on shortcuts to achieve results.  For most people looking for a short-term fix, fear-based leadership wins out, hands down. If you’re satisfied with flash in the pan, short-term thinking, there’s no better way than to lead based on fear. With luck, your business will take off like a rocket – for a while. Eventually however, it will implode.

My friend and mentor Quincy Jones says, “It takes twenty years to change a culture.” Well, over the past twenty or so years we have made dumb sexy. We have dumbed down and celebrated it. Over the next twenty years, we need to make smart sexy again. Go to: www.5MK.org and support our initiative to make “smart sexy again”. Working with youth, we’re helping to break the high school dropout epidemic and encouraging kids to stay in school.

In Love Leadership, I write that the first cousin of fear is short-termism, and short-term’s best friend is laziness. The roommate of laziness is greed and the most popular word ever uttered by fear, short-termism, laziness, or greed, is “me.” Translation: What do I get? But in a world seemingly obsessed with only one question, which is “What do I get,” in order for us to succeed over the long term, we must ask ourselves an entirely different question, which is “What do I have to give?”

Fear is a Lazy Bastard

It comes from the most primitive part of what evolutionary psychologists call the reptilian brain – the part of the brain that governs instincts, heartbeat, and breathing. It takes no work and no intelligence.  Even a lizard can be afraid.

Love though, comes from the most advanced part of the mammalian brain – the forebrain – the region that thinks, remembers and finds meaning. Fear is a feeling and nothing more. Love, in contrast, is feeling plus thought. It’s an emotion that stays in your memory forever. That’s why love survives, long after fear dies.

Love is so strong that it’s the only real reason the human race is still here, after all the opportunities we’ve had to destroy ourselves.

This current economic crisis is not about some sophisticated or complex failure of free enterprise and capitalism as we know it, but the rather simple-minded failure of greed itself. In other words, this is an example of short-termism taken to its most fundamental and core inner flaw: an expediency strictly for one’s own individual benefit; over any sense of (higher) purpose.

As I have said, and will continue to say, as I tour the nation with my “Conversation on Leadership” series, this crisis is more a crisis of virtues and values than any sort of classic economic crisis. No doubt you’re feeling this crisis economically, but this is no different than when you have a cold; you feel or sense it when you sneeze.

I state in Love Leadership that “the basic cause of the original mortgage crisis was a fundamental lack of a relationship with customers. The broker and the borrower in the mortgage deal were not really connected or committed in a real way; the broker and the banker were not really connected or committed; and this is key: the banker and the borrower were not connected or committed. Likewise, the banker and Wall Street were not connected or committed, and fatally, Wall Street securitization firms and the investors around the world to whom they sold these complex products were not connected or committed. There was no real relationship between any of these channels (other than the financial transaction itself).” I continued, “Put even more simply, as long as the broker, the banker, the Wall Street player and others in the deal got their fee, they were happy – or so they thought. This behavior was further supercharged by shareholder pressure for firms to hit aggressive quarterly profit targets, a short-term focus that conveniently translated into huge performance bonuses for executives.” Finally, I summarize in this section, “I am all for free enterprise and capitalism. Without a clearly defined profit motivation, a business simply will not be viable for long. My problem is that the relationship between all these various individuals and groups was simply the financial transaction. The concern was for the buck, not for the borrower.”

Everyone needs to have an enlightened self-interest in the outcome of a business transaction, and it should start with a genuine understanding of and concern with what’s best for the client, the customer, the borrower. That concern – what I call love – was fundamentally absent during the events that led up to this economic crisis. There simply was no relationship with the borrower.

An Example and Examination of Doing It Right

Richard C. Hartnack, an Operation HOPE board member, understands this “transactional approach” problem well. He’s in charge of consumer banking as Vice Chairman of U.S. Bancorp, the Minneapolis-based parent company of U.S. Bank, the sixth-largest commercial bank in America. Prior to that, he served as Vice Chairman of Union Bank of California from 1991 to 2005. U.S. Bank was roundly criticized in 2006 and 2007 for having slower revenue growth than many of its peer banks. A big reason was its decision to largely ignore the mortgage market, except for the prime loans that it had mostly specialized in.

Hartnack recalls that when the financial crisis hit in 2007, U.S. Bank took a hard look at its adjustable rate mortgage (ARM) loans. The bank didn’t make these loans with the intention that they were going to be a problem, but it saw in September 2007 that interest rates at that time were expecting to go up. The bank did the math and knew that the change in the rates would be a big shock to its mortgage holders.

U.S. Bank had a choice: It could try to deal individually with thousands of households and figure out the exact right loan for each one, and while it was doing that, could watch people get into serious trouble paying their loans (and simultaneously watch their reputation take a hit in similar fashion). Or the bank could simply not raise the rates. Hartnack knew that the bank was either going to have to deal with a lot of bad loans, or make this concession and see a set of problems just go away.

The bank opted for love leadership. It held the interest steady, and told customers they had to opt out of their ARM into a fixed rate loan. And as you would expect, a large percentage of the bank’s clients accepted the offer.

Hartnack’s decision turned out to be prescient, one that did well for the bank and did good for its customers. It helped people stay in affordable mortgages, and it avoided foreclosures, where everyone loses. Says Hartnack, “This example is proof that a short-term focus has a lot of temptations. It’s a rare set of circumstances – combining the board of directors, CEO, top management, investors, analysts, the culture and everything else – that creates an environment in which people are willing to look at the long haul and avoid short-term temptations. When you’re operating for the short-term, there are a thousand little trade-offs where you find yourself faced with choices that are terribly uncomfortable. And it takes a huge amount of character on the part of a management team to stand up to those.”

Your reputation depends on something greater than making money. It depends on creating prosperity for all.

Where We Go From Here

My friend Daniel Sachs, CEO of Proventus, a $750 million private investment company in Stockholm Sweden, said in an interview for my book, “It’s up to the people who believe in markets and believe in globalization and believe in free trade to make the case for an open society as appealing as possible to the many. Because if it’s not good for the many (if it’s only good for the few) then it’s not going to win. It’s up to us, who believe in markets and in capitalism, to devise a model of capitalism that is more long term.”

As Sachs has shown, if you want to still be in charge a year from now or five, ten or twenty years from now, you’ve got to build something that lasts. To perpetuate your power into the future, whether you’re growing a business, leading a government, nurturing a family, or running a team, you need to earn the love and respect of those around you, and you need to love and respect them back.

If you lead with love for the long term, people will follow you forever, wherever – for their own good as well as yours – and you will be remembered as a person of greatness.

1 Loss Creates Leaders: There can be no strength without legitimate suffering

2 Fear Fails: Only respect and love leads to success

3 Love Makes Money: Love is at the core of true wealth

4 Vulnerability is Power: When you open up to people, they open up to you

5 Giving is Getting: The more you offer to others, the more they will give back to you