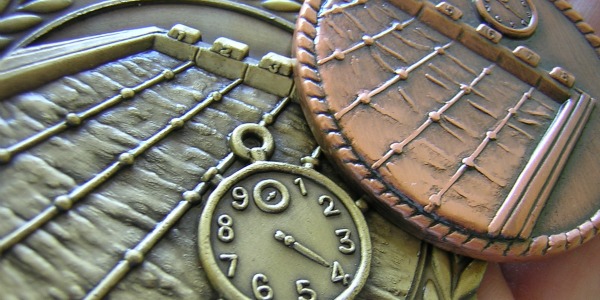 Fear is a four letter word that can paralyze you. It can prevent you from following your dreams, achieving your goals, and reaching your true potential. It can stop you from going after a big promotion, additional contracts, or even trying a new activity.

On the other hand, fear can motivate you to be the best. It can help you to work harder, be more prepared and realize your potential. Fear can help you to accomplish amazing things.

During my ten year career as coxswain of the Men’s Eight for the Canadian National Rowing Team, I’ve realized that fear can be a driving force rather than a debilitating one. I learned from a bitterly disappointing Olympic experience what it takes to overcome obstacles and become victorious.

At the 2004 Athens Olympics, my crew was ranked number one in the world and had been undefeated internationally for over two years. We were the best and we were expected to perform as such by bringing a gold medal home to Canada. There were no illusions about it; all the media had already penciled us in for gold.

Prior to the start of the final race, I wasn’t scared. Nervous yes, but not scared. As the crew from the United States stormed out to a three second lead halfway through the race, the “control” position that we were accustomed to having was theirs. I knew the American boat could go stroke for stroke with us but I didn’t realize they were capable of taking such a big lead.

Our worst fear was becoming a reality, the fear of finishing second.

With our focus now wavering and other countries ramping it up to challenge for gold, silver and bronze, we were unable to come together as a crew and charge back. In the end we limped across the finish line in fifth place, ten seconds behind the U.S. Just seven days prior we had lost to the U.S. by only half a second.

That day in Athens is one that still plays over and over in my head and I never want to experience failure like that again. This begs the question:

Why would I want to continue to put myself on the line like that? Why go to the start line knowing that the outcome could leave me bitterly disappointed?

For me, it was days, weeks and months of: “What if I had been able to make a call to get my guys back on track?”, “What if we had attacked the U.S. earlier in the race?” What if…? Why didn’t I…?  Maybe I should have…? These questions kept tormenting me, and I realized that unless I continued rowing, I would never get the opportunity to test myself under those strenuous conditions and face my fear of coming second.

Following that fifth place finish in Athens and some emotional conversations with my wife about the defeat, I realized that in fact I was a better coxswain than my fifth place standing indicated. I had the opportunity to learn from that situation and make sure it never happened again. I decided that if I was ever in an Olympic final with the opportunity to win gold, it would not elude me.

I had learned from a horrible experience, taking from it “what” to do and “when” to do it. I would better prepare myself for unknown situations like the one in Athens. I would make Beijing different.

I still feared repeating that failure more than ever, not wanting to relive that moment again. It forced me to get out of bed in the morning and go down to the lake on those cold and rainy days even though part of me was saying, “this sucks”. The stronger part told me, “This is what the best in the world do.  You’re one of the best”. It made it easier to train three times a day when most countries only practice twice. It became very clear to me that I would enter the 2008 Olympics in Beijing with no “what if” questions ringing in my mind.

With our coach Mike Spracklen at the helm, my crew and I had prepared for everything. Because Mike had trained us for excellence daily, we were able to sit at the start line feeling confident that no other team had worked harder or pushed themselves more. We were fully prepared, and in the best position to win gold that day.

This time we took control from the first stroke and even as our lead got bigger I knew I would have to continually push my crew beyond their individual potential. There would be no fear of finishing second in my boat on that day.

Crossing the finish line first was in so many ways the absolute best feeling I have ever felt in sport. I was able to learn from my previous failure, which made the accomplishment that much sweeter. It was amazing to hear the Canadian national anthem played for us, and to be able recount the five and a half minutes of triumph instead of the unanswered questions of defeat.

I often find myself thinking about a saying our world-renowned coach told us many times over the years:

I’ve recognized there are essentially two reasons to be nervous; you’re unprepared, or you care about the outcome or result. Sitting at the start line of the 2008 Olympic final I knew that I had done everything possible in preparation, so I was nervous for the right reason. I wanted so badly to be victorious on the Olympic stage.

There’s nothing worse than that really nervous feeling you get before going into the boardroom to make a presentation for the directors that you know you’re not ready for. Or writing the exam that you know you could have studied harder for. I still remember sweating it out in a grade twelve physics midterm because I hadn’t covered all the material and knew I was in big trouble. It’s an avoidable situation and we only have ourselves to blame for those types of circumstances.

I have to remember that even though we won gold in Beijing, it can be very easy to forget those days that I struggled. I would often get nervous for fairly routine rows because I cared about my performance on a daily basis. I would continually strive to be in top form not only for myself, but also for my crew mates. To me, practice became equally as important as the actual race.

Fear is something that I still struggle with on a daily basis. I have found myself searching for the next thing that I am not only happy doing, but also that I can be successful at.

I will not let my fear of change, judgment, or failure, prevent me from setting attainable goals and stepping out of my comfort zone to accomplish them. We must never permit fear to hold us back, but instead allow it to drive us along the road to greatness.

5 Tips When Returning To The Start Line

1. If you lose, don’t lose the lesson. Reflect and move forward.

2. Allow only positive self talk and keep your eyes on the goal.

3. Confidence in training, practice and preparation leads to performance.

4. Avoid complacency at all costs.

5. Mistakes can only happen once. Celebrate your progress every day.