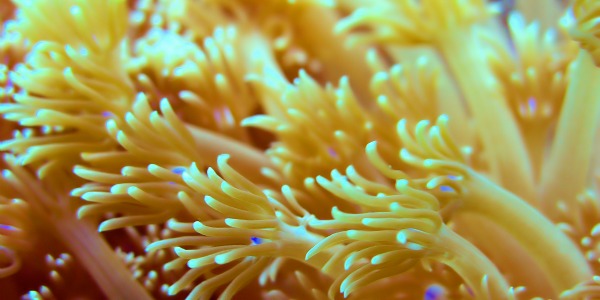 The business world has changed and a new script is required. This article is the third in a series of seven articles that cover the new business SCRIPT. The first article, The New Business SCRIPT introduced the six critical elements that businesses need to master in the new world of work. The second article covered the “S” in the SCRIPT, Strategy @ Speed. This article delves more deeply into the second element: “C” for Collaboration.

My university Professor Rakesh Sondhi, a strategy and business guru, said to me “write your thesis on something you are passionate about” – This sounded like a pearl of wisdom to me as the thesis was going to occupy the next twelve months of my life. As a scuba diver, I found coral reefs amazing so I decided to do a business thesis on coral reefs. My friends and colleagues wondered if I’d lost the plot (and I wondered they might be right) however, as I researched coral reefs, I suddenly recognized that I’d uncovered a treasure trove of stories and examples for business leaders. The more I researched, the more I became excited by the living examples and richness of the collaborative systems and structures visible on these magical natural creations.

The easiest way to share the enchanting world of a coral reef is for you to imagine that your business is a coral reef in a tropical ocean. Now imagine that the sea creatures are your customers, your suppliers, and even your competitors. To give us a sense of what life is like on a coral reef let’s explore an quote from BBC broadcaster and naturalist David Attenborough: “Corals provide the foundations on which the entire community relies…as the community grows intimate relationships are formed and different creatures become dependent on one another. Even creatures that live in the deep oceans visits reefs for a clean…here swim the smallest and the largest creatures in the sea”

In this quote David Attenborough refers to the intimate and collaborative relationships found on coral reefs. Here are a few examples:

The clownfish and the sea anemone:

Cleaning Stations offer one of the best and most remarkable examples of collaborative relationships in nature. Like cars lined up at a car wash, sea creatures; from turtles, rays, and even the most ferocious of ocean going predators – sharks; line up one behind the another to be cleaned by cleaner shrimps or cleaner wrasse. I’m not sure if you recall the scene in “Finding Nemo” where Bruce the Great White decides that he is going to become a vegetarian and sings the mantra “fish are friends not food”. One can imagine sharks having to repeat this mantra over and over to themselves as they visit these cleaning stations!

But perhaps the most incredible of all alliances in a coral reef is the one found in coral itself. Coral is an animal that secretes limestone but it could not possibly lay down its stony skeleton at the rate it does without help. This help comes from an unlikely source – an algae called zooxanthellae whose alliance with coral begins a process that results in sheer natural architectural magic. Zooxanthellae actually live within coral tissue and, like all plants, photosynthesise to produce sugar and oxygen. Coral benefits from having its own in-house supply of food and oxygen and this greatly facilitates its growth (Coral achieves growth rates of three to five times faster because of this alliance). That’s not bad going – how many businesses do you know who have collaborative alliances offering this level of growth?

How the algae came to live within the coral no one knows, but the relationship is symbiotic because the coral provides a safe home inside which the algae live and the algae supply the coral with a natural and sustainable energy supply. The power, strength, and success of this alliance is evident when we consider that coral reefs (in the form of the Great Barrier Reef) are the only naturally-made living structures visible from space.

In my company’s Innovation and Futures Lab, we continue to research what we now call an “eco-reef” business model. After mapping out the alliance structures found on coral reefs and comparing them to systems found in the business world, we made an amazing discovery: the alliances you find on an underwater reef are not that dissimilar to a number of new business models that have evolved over the past ten years.

Think about it, do can you think of any new companies whose business model is based on  creating a platform around which entire communities develop and thrive? Of course you’ve identified several: Facebook, Google, Apple’s iTunes, ebay, Groupon, and Amazon are all successful businesses that have reshaped business models and built dominant market positions by creating a platform around which a community can develop. Most of these businesses (apart from Apple) have been in existence for under ten years, and yet they are amongst the most powerful companies in the world. The eco-reef model is immensely effective when adopted and it develops rapidly. Once the platform is established, like a coral reef, these platforms are highly resistant to attacks from competitors and can even be aggressively defended by the community.

Of course, the major benefit of controlling the platform or nodal position is controlling the lion’s share of the community’s profits. But it is not just the alliance platform that benefits; successful alliances also grow and thrive by being associated with the platform. Mashable, a social media and internet news blog, estimates that there are now over 45,000 app. developers that benefit from the iTunes platform.

Our research is showing that the “eco-reef” business model is a model of the future – and you don’t need to be Facebook or Google to create a platform around which a community can grow; you can be a small or medium-sized business.  Yes, the Internet has enabled business leaders to create these eco-reef platforms, but the Internet is just the enabler, it is not the platform.

The platform is the concept on to which the community connects. What you need is a concept or an idea that a community can latch onto. Once you begin to attract a community to your concept, your platform begins to grow, much like that of a coral reef. And this business model is self-perpetuating, as Groupon discovered when, with only $1 million in seed-money, they created a deal-of-the-day concept back in November 2008. Today, according to Wall Street, Groupon is “on pace to make $1 billion in sales faster than any other business, ever”.

Here are a few questions to ask in your business:

The evidence is conclusive. Collaborative business models are the models of the future. Today business it too complicated to “go-it-alone”. Nature has known this for a long time and has established ingenious collaborative solutions. Through collaboration, vulnerability is changed to strength and resources are efficiently utilized.